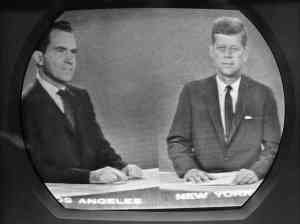 The Great Debates were possibly the most influential factor in deciding the winner of the election. This was the first election in the history of the United States that had the technological capabilities to air presidential debates over television.  Not until 1960 did 60% of Americans rely on television for information and 90% own a television set (Kraus, 193). Also, Section 315 of the Communications Act previously required that all candidates, even those with no chance of winning, be given equal coverage by the television stations; this was not resolved until 1959 with its suspension by Senate Joint Resolution 207 (Kraus, 74). As a result, both Kennedy and Nixon planned to take advantage of the legal access to media expression.

Since these debates were aired over television, it was practically impossible not to have some knowledge of the events that occurred.  The candidates were thrown onto the world stage, airing on every television channel at the same time. In fact, most people were actually looking forward to them with “great interest”: a Gallup Poll sets this at 55% of adults, much more than in the previous two elections (Kraus, 193). Moreover, in the weeks leading up to the first debate, Gallup Polls had Nixon and Kennedy virtually tied in terms of popular support, both hovering around 47% for each; the debates could have a significant role in gaining support for one of the candidates (Matthews, 144).

The content of the debates was not what made them such an important part of Kennedy’s eventual victory. In fact, although they were from different parties, Nixon and Kennedy agreed on major goals, such as the need for a better military and a stand against communism, differing only in the means. However, Kennedy’s approach hit home harder with the voters; he appealed to them directly that he could “get the country moving again” (Matthews, 152). Nixon, on the other hand, continually insisted the differences between him and Kennedy were not all that great, when he should have been attacking his opponent and building himself up.

The fact of the matter is that with television, the content was not all that mattered; appearances did too. This aspect of the debates certainly hurt Nixon, who had undergone knee surgery earlier that month and had been overexerting himself since. Instead of getting some rest the night before the first debate, he gave five speeches around Chicago and one that morning. He did not prepare, either, as he was full of confidence and underestimated the young Kennedy; in the words of one of his aids, “We kept pushing for him to have some give-and-take… He hadn’t done anything except to tell me he knew how to debate. He totally refused to prepare” (Matthews, 147). After the first debate on September 26, reporters noted that Nixon seemed “tired, drawn, and that he appeared to be ill,” as he had a fever and had lost a lot of weight since his operation, which led the public to be “more conscious of his appearance than of what he was saying,” (Kraus, 95). During the debate, he seemed stiff, uncomfortable, and ill-prepared, sweating and constantly looking around.  Although make-up artists did their best to improve his appearance for the ensuing debates, not much about his behavior changed. He never looked at the person asking him questions, nor did he look at his opponent when Kennedy was answering; his eyes were often directed elsewhere.  Furthermore, his appearance in general gave off the impression he did not care. He noted: “Oh I get letters… and they say ‘Why do you wear that heavy beard when you are on television?’ Actually, I don’t try, but I can shave within thirty seconds before I go on television and still have a beard” (Matthews, 145).

On the other hand, Kennedy always appeared only poised and focused. Before the first debate, as Nixon was rushing around the country, Kennedy spent the weekend resting up  in the Ambassador East Hotel and preparing for the debate. He recognized that the debate could give him the advantage he needed. He showed up tan from his recent campaign trip through California, which was a stark contrast to his sickly, pale opponent. Moreover, Kennedy looked directly into the cameras when answering questions and interacted with the audience, and when Nixon was talking, he would look at his opponent while listening intently and respectfully; it was obvious he was prepared and comfortable.  His good looks were no doubt another important asset when being broadcasted across the country.  CBS producer Don Hewitt noted that Nixon’s confidence must have been shaken when “He and I were standing there talking when Jack Kennedy arrived. Tanned, tall, lean, well tailored in a dark suit, the younger candidate gleamed. Photographers, seizing their chance, abandoned Nixon and fluttered about their new prey like hornets. He looked like a young Adonis” (Matthews,148).

As a result, a majority of the public who watched the debates on television thought Kennedy had won; it was more evenly divided when it came to radio, even generally favoring Nixon  because those listeners were not subject to the influence of image.  According to several polls of television viewers, all conclusively agreed that Kennedy had won the first debate and the debates overall, gained the most from them, and made a better impression. After the first debate, Kennedy gained a majority of the popular support at 49% to Nixon’s 46%, and in the end gained a total 4%.